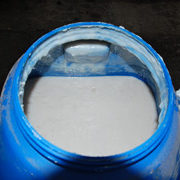 1. Effective mould lease: it keeps the concrete products original color and reduces bubbles. It also covers up the bubbles and air holes. Compared with oil release, it reduces two thirds holes and bubbles on the same area to make the s surface smooth and neat
2. Effective rain-proof: with the isolation layer formed, there is no effect from rain.
3. No corrosion and contamination to the surface of concrete, mould, rubber sealant and rubber shoes.
4. After mould released, there is few dirt and sand on the mould, which makes it easy to clean. The character of corrosion – inhabitation to metal mould can keep metal brightness, save cleaning effort, and extend mould service life. Under urgent condition, it has high efficiency. Mould releasing, cleaning, spreading and spraying, setting up can be operated simultaneously.
5. Easy to mix with water and easy to use. After spraying or brushing on the mould, when the isolation layer is formed , it is ready to cast the concrete.
6. Cost-effective. The cost is 1 to 2 times lower than using oil and other release product.